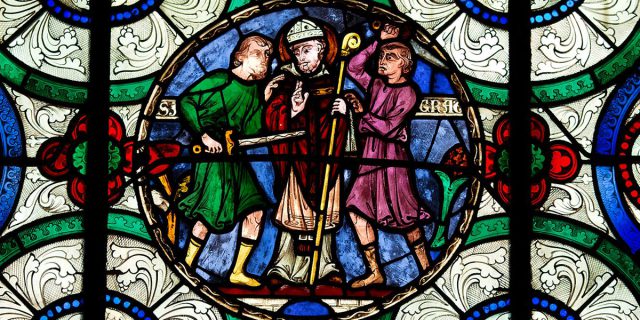 Our parish patronal saint has been in the news lately!

Thomas Becket, Archbishop of Canterbury, was murdered in his cathedral on 29 December 1170 by four of Henry II’s knights who believed that the King wanted Becket assassinated. In honor of the 850th anniversary of the martydom of St. Thomas à Becket, A vestment traditionally thought to have been worn by Saint Thomas Becket at the time of his brutal murder in Canterbury Cathedral in 1170 was loaned to the UK as part of the year’s commemorations to mark 850 years since his death, and 800 years since his remains were moved from the Cathedral’s crypt into a new shrine.  The Becket relic is on loan to the Cathedral from the Papal Basilica of Santa Maria Maggiore in Rome, with the kind permission of the Vatican. Click here to read more about this relic – St. Thomas Becket Relic

In the United States of America –

On December 28, 2020, the President issued a Proclamation on the 850th Anniversary of the Martyrdom of St. Thomas Becket, inviting “the people of the United States to observe the day in schools and churches and customary places of meeting with appropriate ceremonies.” The proclamation described Becket as “a statesman, a scholar, a chancellor, a priest, an archbishop and a lion of religious liberty.”  Click here to read the full statement https://www.whitehouse.gov/presidential-actions/proclamation-850th-anniversary-martyrdom-saint-thomas-becket/