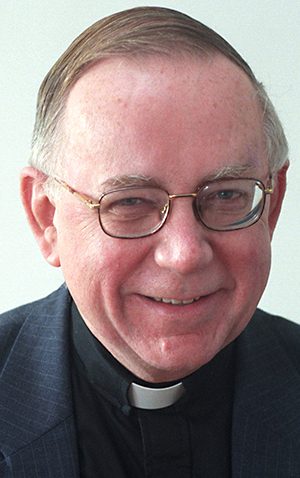 Rev. John Patrick Langan, SJ, was born in Hartford, CT, on August 10, 1940. He graduated from University of Detroit Jesuit High School, and after declining a National Merit scholarship, entered the Novitiate of St. Isaac Jogues in Wernersville, Pa. in 1957. He did juniorate studies at Colombiere College in Clarkston, MI, and philosophy at West Baden College in Indiana, while also pursuing a master’s degree in classics from Loyola University Chicago. He studied theology at Woodstock College in Maryland and later went on to attain a Ph.D. in philosophy from the University of Michigan. He was ordained a priest on June 10, 1972.

Following ordination, Fr. Langan joined the staff of the newly formed Woodstock Theological Center in Maryland, and from 1981 to 1986 taught philosophy first at Georgetown University and then at Yale Divinity School. He then served two years as acting director and superior of the Woodstock Theological Center. During this time, he also did work for the US Conference of Catholic Bishops, drafting the statement against capital punishment and contributing to “The Challenge of Peace” and “Economic Justice for All.”

In 1987, Fr. Langan began what would become a nearly 30-year tenure at Georgetown University, as a professor of philosophy and Christian ethics and later as the Joseph Cardinal Bernardin Professor of Catholic Social Thought. He also taught philosophy for two years at Loyola University Chicago and was rector of the Georgetown Jesuit Community for five years.

In 2017, Fr. Langan moved to the Colombiere Jesuit Community in Baltimore where he continued to write and pray for the Church and the Society of Jesus. He died on March 20, 2020 at the age of 79.